Never give up is the attitude – Alka Patta 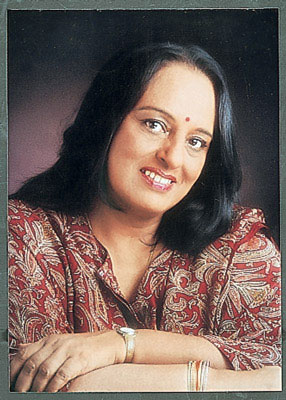 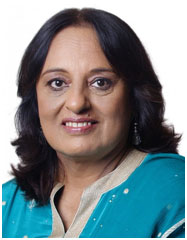 I met Ms. Camellia Panjabi in 1995, when she was the chief guest at the valedictory function of IHM Mumbai. I was in the first year of Hotel Management then, had won an award that I received from her. She also addressed the audience, we all loved what she spoke and I guess we still carry the message in our hearts; a message that some of us still use as a guide in our personal or professional lives. During my years at the Taj Mahal Palace and Tower Mumbai, I have experienced and lived a strong work culture; it used to be called the ‘Taj way’. During the late 90s the campaign was called ‘She is the Taj’. I was a part of it. I remember doing a video where we, a selected few from different departments had to say as a team, “We can and we will” and now the experience is called the ‘Tajness’. A few things have the power to incite the ‘Real Passion’ in you; every moment every day. Over the years Tata values have embodied our real selves and contributed to delivering pure “Tajness”. When I look back, somewhere I get a notion that the idea of strong meaningful campaigns probably came from Ms. Panjabi.

She has played a very important role in shaping up the Indian hospitality industry, she is not only credited with creating hotel sales and marketing but also her culinary achievements are noteworthy; she introduced Indian cooking in the UK. She along with a core team under Mr. Ajit Kerkar transformed the Taj Mahal Hotel Bombay into the country’s finest hotel company. She is regarded a legend in the hospitality and culinary world. She was the Director on the Board of the Taj Hotels for over 31 years. She serves as the Group Director along with her sister Namita Panjabi, her husband Ranjit Mathrani at the award-winning Masala World restaurant group that specialises in authentic, regional Indian cuisine. Masala World owns three upmarket restaurants in London – Chutney Mary, Veeraswamy  and Amaya. Uniquely, it also operates in the mid-market with the expanding Masala Zone brand.

Subhash Thaker a Taj veteran says, “Camellia was the spirit of the TAJ. She showed the way with her own example and walked the path she preached. In Marketing of hotels, we are yet to see any one like her. Great leader, visionary and harbinger of Tata values.” 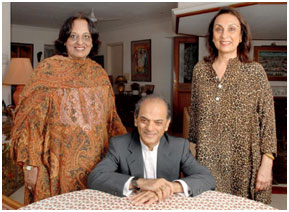 Born in Mumbai she studied economics at Cambridge in the 1960s. She came back to India and applied for a job in the Tata Administrative Service. In those days most big organisations were managed by men and women hardly reached the top. The Tatas hired her, purely on her merit, ignoring the unwritten protocol of not hiring women for key roles. She was confident and very straightforward in her interview, which impressed the interviewer. She landed the job when she told the interviewer that she could fire a gun which was more than what most of the Tata executives could manage; that was the icing on the cake – making her a part of the team and she embarking on an extremely illustrious career. A career, that became a game changer. She started work with the Tata Oil Mills, after a short stint there she was asked to be a part of the Indian Hotels, that managed the Taj; then it was just one property (minus even the tower wing).

When she came to the Taj as a young trainee Taj was a unique place, having its own merits and challenges. There were scores of staff who had been there for twenty, thirty and even forty years. It was a place that had reached it’s pinnacle as the staff knew their job in and out, they had lived them! They knew their guests well even though they kept no records such as names, family history, preferences, likes or dislikes. 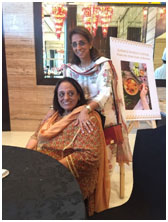 Mr. Ajit Kerkar, her boss then, was on a mission to modernize the hotel. That involved an ambitious training programme, bringing in catering professionals, rotating chefs between sections (of the kitchen) that resulted in the Taj creating excellent all-rounder chefs. A programme of merit-based professional recruitment began in all departments. A Taj Management team used to visit all leading catering colleges in the country annually, and they’d select a few from every college. What the Taj looked for were people with the right value systems, who wanted to rise in life through sustained hard work and dedication, just like their parents, whom they observed closely. They weren’t looking for people who were already very smart or polished. What they looked for above all, was high integrity, the ability to work hard consistently and conscientiously, to respond beyond the call of duty, to always be able to put guests first, and to work under pressure. These were the core values they looked for; things like personality, grooming, hospitality techniques could be worked on later. Mr. Kerkar’s instructions were not only to look for leaders but also followers. And everybody had to be home grown so that they had imbibed this distinctive Taj culture. Every single recruit to the Taj Bombay, including the waiters, was personally interviewed by him. He always wanted to know the person, his family background, and his motivators. Taking the cue from him, Ms. Panjabi too traveled the country interviewing every sales executive herself. Thus she built a strong team of sales professionals, who helped her later as the Taj  grew from one property to a magnificent chain.

She along with Mr. Kerkar was responsible for redesigning the Taj. Mr. Kerkar persuaded Mr. JRD Tata to let him open a new wing on the site of the old Green’s Hotel.

When I spoke to her regarding this she said,”Everything the Taj stood for had hundreds if not thousands working in unison. She says, “The creation of the new wing of the Taj was already decided by the Indian Hotels board and ABK ,  Xerxes and Col Sawhney before I joined in 1969, and the digging of basements was in progress!”

When the tower wing came up, Mr. Kerkar and Ms. Panjabi had decided to venture into Goa, which the Taj created as an Indian destination entirely on its own. Later they took over the management of the Rambagh Palace in Jaipur and the Lake Palace in Udaipur, transforming them into the world’s best, taking them on the world map.The Taj became a national chain with the opening of the Taj on Man Singh Road in 1978. The hotel was an instant success, becoming the most sought after hotel in the city.

Taj hotels got their persona from Ms. Panjabi’s vision. The marketing campaigns she launched positioned the Taj group as the country’s leading luxury chain and she ensured that hotel group looked every bit Indian. In the 70s, when India was not really known for luxury, Ms. Panjabi found the perfect market niche – the best of Indian hospitality and luxury that this country could offer; that was the Taj Hospitality.

Also Indian hotels were not really known for their food. It was the Taj that changed that by becoming the first hotel to break away from the eggs to order or waffles and breakfast cereals formula to serving their guests idlis and dosas on the breakfast menu. Shamiana, the coffee shop at the Taj Bombay, was the first to put items like pav bhaji on the menu. Other firsts that she offered was, when Machan opened in Delhi in 1978, she asked to keep the prices low so that the younger generation could use it and sample the offerings from the hotel. The Golden Dragon at Taj Bombay was India’s first Sichuan restaurant and it changed the way in which Indians perceived Chinese food. The House of Ming at the Taj Delhi offered delightful Cantonese and Sichuan creations which were loved by the Indian palate.

In 1982 the Taj opened The Bombay Brasserie restaurant in London that made Indian food trendy. She led and planned the 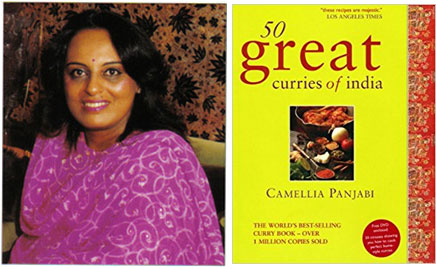 operations; she served sevpuri as a starter at the top London eatery, that’s where she became a game changer. Her recipe book, 50 Great Curries of India, is probably the bestselling international Indian cookbook of all time. Another contribution of hers was the opening of Bangalore’s Paradise Island in the 80s and introducing Indians to the cuisines of Thailand, Malaysia and Indonesia resulting from her own love of the Far Eastern food. Her dream was to prove to the world that Indian cuisine is as sophisticated and as advanced as the French, Japanese, Thai or any other cuisine. She took pride in being an Indian and strived all to be proud of the rich heritage. Her life and career demonstrate that and crown her as the queen of Indian food just like she is credited with the advent of the hotel sales and marketing departments.

Chef Satish Arora who worked closely with Ms. Panjabi says, “I was fortunate to work closely with her on a few projects like Shamiana, Bombay Brassiere, Raga in New York, Golden Dragon to name few. Yes she is the one who made Taj with our own Dynamic Mr Ajit Kerkar.”

Ms. Camellia Panjabi says, “For all of us, working at the Taj was not just a job, it was our very life.That same spirit has been transmitted to the new generation of younger professionals, that spirit will always live on. The General Manager of a Taj Hotel, after a regular day of administrative work, was expected to be in the lobby in the evenings, to receive and welcome guests, whether they were residents or just visiting our restaurants. He was to be like a host receiving his personal guests at his home. Some might say this was an old fashioned notion of hospitality, but that was the Taj way”.

Another associate of hers who worked very closely with her for more than two decades and spoke so fondly of her was Mr. Partha Chatterjee, in fact he wanted us to meet so that he could share many more instances and anecdotes. I am truly humbled, Taj has created such greats and will continue to do so. You can take a man out of the Taj but you can’t take the Taj out of him, holds so true for each one of us who has been a part of the Taj family.

She continues to be connected with the legacy, she attends Taj reunions and I guess that’s where people get to feel her persona. 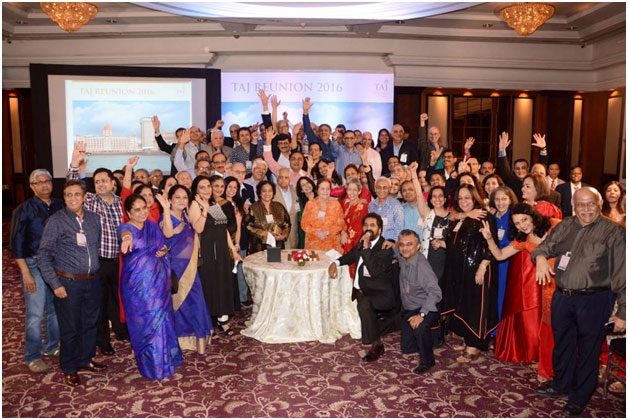